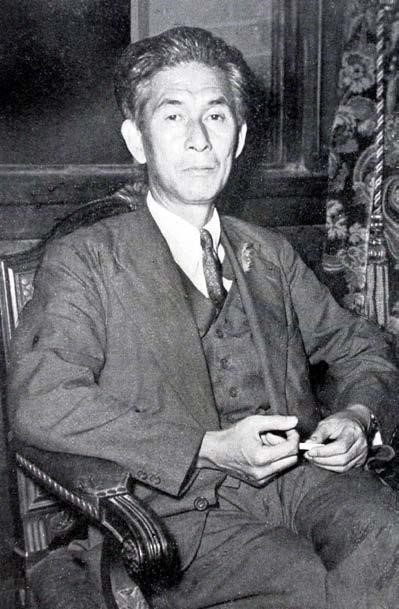 Esaki Teizo (1899-1957) was one of Japan’s leading entomologists and zoological taxonomists. In 1923, he became an associate professor in Kyushu Imperial University’s Faculty of Agriculture and was promoted to full professor in 1930. He subsequently held a number of positions, including Dean of the Faculty of Agriculture and Dean of the College of General Education at Kyushu University, member of the Science Council of Japan, Chair of the Entomological Society of Japan, and Chair of the Lepidopterological Society of Japan. A global authority on aquatic Heteroptera , Professor Esaki was active on the international stage as a member of the Council of the International Congresses of Entomology and made a substantial contribution to research concerning the butterflies of Japan and neighboring countries, the fauna of Micronesia, and the habitats of planthoppers , among other topics.

During 1936 and 1939, Professor Esaki visited the South Seas Mandate (Northern Mariana Islands, Palau, Marshall Islands, and Micronesia) three times. The collected insects and other various creatures during his visits became a huge type specimen collection including 27,000 Micronesian insects. They are now preserved both in the entomological laboratory of the Faculty of Agriculture and the Kyushu University Museum.

The Department of Agriculture's Entomology Database (KONCHU) provides a search for insects that have been announced by Professor Esaki as the discoveries of a new species.

The University Library has a collection of both Western books (concerning entomology) and books from Japan (Japanese and Chinese texts on plants, minerals, and animals used in Chinese medicine) that formerly belonged to Professor Esaki Teizo of the Faculty of Agriculture. They were purchased after Professor Esaki’s death by the Faculty of Agriculture and the University Library, respectively, and are held at the Central Library.

Records of official visits to the South Seas Islands

Records of official visits made by Kyushu University researchers over the decades are stored in the Kyushu University Archives, providing a valuable source of information for recounting the history of the university’s academic exchanges with other countries.

This collection features materials covering politics, diplomacy, and culture in the Far East during World War Two, which was amassed by the Kyushu International Culture Association (1939-1943), an international culture organization established within Kyushu Imperial University. The photographs in this collection mostly comprise a set of 184 photographs displayed at the Exhibition of Photographs from Emerging Asian Cultures, which the association held at the Tamaya Department Store in February 1940. They are cultural photographs (such as images showing items of academic interest, those taken as records, and photographs depicting landscapes and documenting customs) taken by the university’s academic staff at the time in the Asia-Pacific region. The Faculty of Agriculture’s Utsusukai Scientific Photograph Research Group (headed by Professor Esaki Teizo) had primary responsibility for managing and implementing this exhibition.