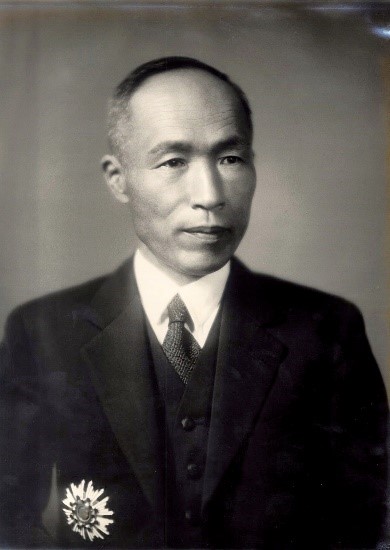 After graduating from Tokyo Imperial University, Kanehira Ryozo (1882-1948) joined the Government -General of Taiwan as a technical specialist and went on to hold positions within the administration’s experimental forestry station and as head of the Forestry Department at its Central Research Institute. In 1928, he was appointed to Kyushu Imperial University as professor of the second course at the Faculty of Agriculture's Forestry Department. P rofessor Kanehira identified tree species based on the structural forms of their tissues and undertook research into useful tree resources. Kyushu University has plant specimens that he collected from across the South Seas (including Southeast Asia, Micronesia, and New Guinea), along with samples of timber that he gathered by such means as exchanges with individuals in other countries. The Floras he compiled, describing the trees of Taiwan and useful tropical trees, accompanied by outstanding botanical drawings produced by artists, are still highly praised today.

Records of official visits to the South Seas Islands

Educational wallcharts are visual teaching aids featuring drawings printed on large sheets of paper and mounted like a scroll, which were hung on the classroom wall or blackboard when in use. Several examples were discovered when the School of Agriculture’s laboratories were being relocated and are now held by the university’s museum, which is conducting research into them. This exhibition introduces two wallcharts from Professor Kanehira’s laboratory, both plant distribution maps (Kyushu University Museum botanical collection ).

The “Dipterocarpaceae Distribution Map” is a map showing the distribution of this family of mainly tropical lowland rainforest trees , which are used to produce the plywood known as lauan. The map is a translated, modified, and colored version of a diagram that appeared in an American research report. An almost identical diagram appears in Professor Kanehira’s “Flora of Useful Tropical Plants” (1926, Taiwan Branch of the South Seas Association ).
Soon after taking up his post with the Government-General of Taiwan, Professor Kanehira was dispatched on a tour to inspect the Philippines and other South Seas islands. In his report on this official visit, entitled “Report on an Inspection of the South Seas Islands” (1914), Professor Kanehira stressed the usefulness of Dipterocarpaceae.

This collection features materials covering politics, diplomacy, and culture in the Far East during World War Two, which was amassed by the Kyushu International Culture Association (1939-1943), an international culture organization established within Kyushu Imperial University. The photographs in this collection mostly comprise a set of 184 photographs displayed at the Exhibition of Photographs from Emerging Asian Cultures, which the association held at the Tamaya Department Store in February 1940. They are cultural photographs (such as images showing items of academic interest, those taken as records, and photographs depicting landscapes and documenting customs) taken by the university’s academic staff at the time in the Asia-Pacific region and include some taken by Professor Kanehira.