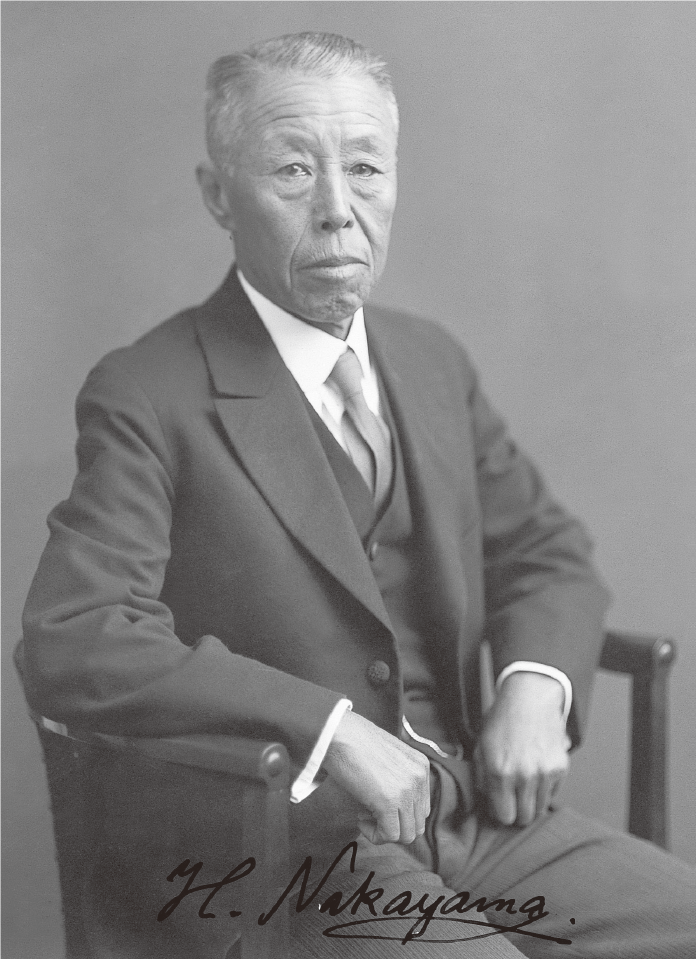 Professor Nakayama Heijiro (1871-1956) was the first professor of pathology at Fukuoka Medical College (now Kyushu University School of Medicine), taking charge of pathology studies until 1931. In that capacity, he left a legacy of major achievements in such areas as research into the life cycle of the parasite Schistosoma japonicum. In his youth, Professor Nakayama became interested in archaeology after reading reports about the Mukogaoka shell mound in Yayoi-cho, Tokyo. Following his appointment to Fukuoka Medical College, he embarked on archaeological and ancient historical research in earnest in 1912, at the age of 41, and led the field of archaeological research in Kyushu from the 1910s until the early 1930s . He left a large collection of archaeological items gathered through his exhaustive site surveys and surface sampling. Professor Nakayama’s research output was diverse, spanning such topics as studies of the King of Na gold seal and of agriculture and the production of stone tools in the Yayoi period, urban studies of ancient Hakata, the discovery of the Korokan, a Heian period official guest house, and the designation of the Genko Borui, a defensive stone wall constructed in the 13th century in preparation for an attack by Mongol forces . All his findings demonstrate that Fukuoka was a historically important point of contact with the continent and retain their academic significance today.

The exhibits are primarily drawn from materials donated to Kyushu University Museum by Mr. Okabe Nobuhiko, the son of Dr. Okabe Yoitsu, a former student of Professor Nakayama’s, and materials donated to the predecessor of the Gyokusenkan that was historical geography reference room of the former Fukuoka High school by Professor Nakayama himself. These items were collected by Professor Nakayama, who used them as the basis for his writings. They include artifacts that clearly featured in his articles, handwritten field notes, and other materials of great value in the history of scholarly pursuits.

Agricultural artifacts from the Yayoi period

These are artifacts relating to wet rice agriculture, which spread throughout the archipelago due to influences and the movement of some people from the South korean peninsula during the Yayoi period. Still an important occupation in Japan today, rice cultivation developed in the Yayoi period through the blending of influences and migrants from south Korean peninsula and culture from local inhabitants of Jomon. The Yayoi period, which saw the beginning of wet rice agriculture, is known to have been a key period when the patterns of society that had held sway until then underwent tremendous change. Professor Nakayama propounded that, between what had been identified as the Stone Age (prehistoric age) and the Kofun period (primitive age), when metal tools began to be used, there had been an intermediate period, during which both stone and metal tools were used. Thus, it was he who substantially established the existence of the era that later came to be called the Yayoi period. Professor Nakayama also discovered the site where basalt axes had been made at the Imayama site and Imazu shell mound in Fukuoka Prefecture’s Itoshima district and reconstructed the manufacturing process. In addition, he reconstructed the manufacturing process for schalstein stone knives found in Tateiwa , Iizuka City, extrapolated the area where the stone originated, and asserted that the division of labor and trade already existed during that period.

The Korokan in Dazaifu was an official guest house that served as a center for foreign trade and diplomacy in the Heian period, established to replace the late 7th-century Tsukushikan guest house. Since the Edo period, the Korokan had been thought to have been located in the Kannaicyo district of Hakata (near Nakagofuku-machi), but, based on the content of Man'yoshu poems about Japanese missions to Silla, Professor Nakayama believed that it could only have been sited in the grounds of Fukuoka Castle. At the time, the site of Fukuoka Castle was off-limits, because the Imperial Japanese Army’s 24th Infantry Regiment was stationed there, but it was opened to the public during the annual Hakata Dontaku festival. Accordingly, to prove his theory, Professor Nakayama went along in 1915 and conducted a field survey, gathering ancient tiles, based on which he demonstrated that the Korokan had been sited within the grounds of Fukuoka Castle. In 1987, more than 30 years after Professor Nakayama’s death, structural remnants were found during refurbishment of the Heiwadai Stadium, proving the professor’s theory that the Korokan had stood on the site of Fukuoka Castle.

The Genko Borui was a defensive stone wall built along the coast of Hakata Bay during the 13th century, in preparation for an attack by Mongol forces. While remains can still be seen along the coast of Hakata Bay, the catalyst for the identification of these remains was a series of columns by Professor Nakayama published in the Fukuoka Nichinichi Shimbun newspaper, under the title “The Value of the Genko Borui.” It was in these 1913 columns that the term “Genko Borui” appeared for the first time, used by the professor to refer to the clusters of stone walls dotted along the Fukuoka City coastline, which had until then been called “Ishitsuiji.” In the 1910s, Professor Nakayama—then a professor in the School of Medicine—conducted a thorough field survey of the Fukuoka Medical School (which later became the Kyushu University School of Medicine) and the College of Engineering (later the Kyushu University School of Engineering), based on which he estimated the location of the Genko Borui on the campus grounds. It had long been thought that the remains of the wall in the location hypothesized by Professor Nakayama had been destroyed by city center development and the construction of the Kyushu University campus. However, in 2016, 60 years after Professor Nakayama’s death, an excavation survey conducted due to Kyushu university’s relocation from the Hakozaki Campus unearthed a series of masonry structural remnants, proving the professor’s hypothesis beyond all doubt.

Celadon porcelain (surveyed from the sea floor in Hakata Bay)

Among the materials that Professor Nakayama donated to the Gyokusenkan are celadon porcelain items surveyed from the sea floor in Hakata Bay. These celadon pieces are among the items that demonstrate the prosperity of the medieval city of Hakata. It is thought that, just as the Korokan was losing its function as a center for trade and coming to the end of its useful life in the mid-11th century, medieval Hakata began to become an important hub for the Japanese archipelago. The large quantity of celadon and white porcelain and other imported ceramic ware discovered through excavations has been cited as evidence of this. The imported ceramics unearthed in the bay are items that broke during the sea voyage and were discarded en masse when unloaded at Hakata. A far larger quantity of undamaged products is known to have been transported to consumption areas throughout Japan after passing through the distribution hub of Hakata.